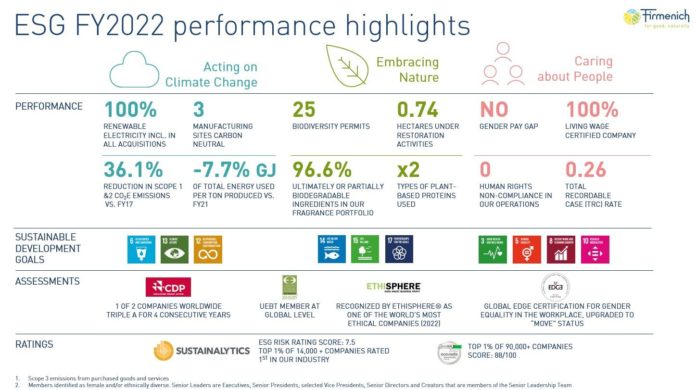 "I am proud that we have continued to accelerate our leading ESG actions despite the challenging economic climate and have continued to make measurable progress towards our 2025 targets, exceeding them even for renewable ingredients and the living wage," said Gilbert Fantôme, CEO of Firmenich. "Our Firmenich Inclusive Capitalism business model is gaining ground and is becoming increasingly relevant in today's world. Every year, new climate extremes have an increasing impact around the world: Firmenich's bold environmental ambition is a vital business investment today and for the future. "

"Firmenich's ESG strategy continues to advance in our own operations and throughout our supply chain," said Thomas Andro, the company's Senior Director, Sustainability. "In addition, consumer demand for sustainable products is a structural growth trend in our industry and Firmenich's outstanding ESG credentials, combined with our leadership and innovation in natural and renewable ingredients, are becoming even more relevant to our clients as they move forward with their own sustainability roadmaps."

Highlights of the GNE's performance for fiscal 2022

Overall, Firmenich achieved an improved score from Sustainalytics with a score of 7.5, in the global top 50 of around 15,000 companies, highlighting the Group's low ESG risk profile. A second consecutive Platinum rating by Ecovadis with an industry-leading score of 88% placed Firmenich in the top 1% of all companies evaluated worldwide. The Group was also ranked for the first time as one of the "2022 World's Most Ethical Companies" by Ethisphere, a global leader in defining and promoting ethical business practice standards.

Firmenich continued to work actively through alliances and partnerships, including the United Nations Global Compact, the Union for Ethical Biotrade (UEBT), One Planet Business for Biodiversity (OP2B) and the Science-Based Targets (SBTi) initiative, to drive positive change at scale and foster effective action on climate, nature and people in the business world.

The Arthes group enriches its range