Yes, we are willing to pay more for environmentally friendly packaging! 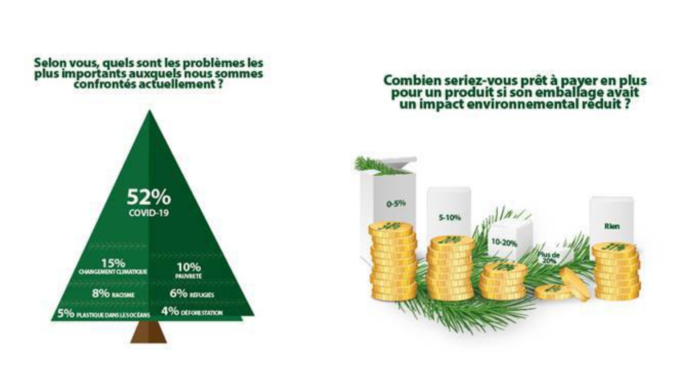 Seven out of 10 French buyers (69%) say they would be willing to pay more for a product if its packaging were more environmentally friendly, according to a new study by Perspectus Global on behalf of Pro Carton, the European Association of Cardboard Packaging Manufacturers.

Interestingly, the survey found that 84% of Young French Adults (aged 22 to 28) were the most willing to spend more for the good of the planet. The over-65 age group, which is one of the wealthiest age groups, was the least likely to pay more, although three in five (57%) would be willing to spend more on more environmentally friendly packaging.

The survey of 997 adults in France suggested that the majority of consumers were now resolutely concerned about the environment, despite a difficult economic period and the current COVID-19 pandemic.

Unsurprisingly, the coronavirus was ranked as the biggest problem facing the world today by half (52%) of consumers. Climate change (15%) was the second most popular choice. Interestingly, almost half (45%) of French consumers thought that the pandemic had made us more environmentally conscious.

Some 38% of French participants, one of the highest rates in Europe, felt that distributors were not doing enough to introduce eco-friendly packaging (such as cardboard). However, almost all European adults (96%) believe that governments, as well as 96% also distributors and brands, should do some or much more to protect the environment.

Tony Hitchin, Managing Director of Pro Carton, said: "We were delighted, and somewhat surprised, to see that so many customers wanted to stay true to their environmental principles." It was confirmed that cardboard was the preferred packaging material: less than one in 10 French participants preferred plastic. The evidence is clear. Consumers want brands and retailers to adopt more sustainable packaging, such as cardboard, because the cost they have to bear is lower than the cost to the planet.

"The inherent properties of cardboard make it the ideal choice; it is made with a renewable resource, it is recyclable and biodegradable, and Europe's forests are developing with an area equivalent to 1 500 football pitches per day! »