The Cosmetic Valley competitiveness cluster is mobilizing its troops in Rouen for a solidarity and combative general assembly. 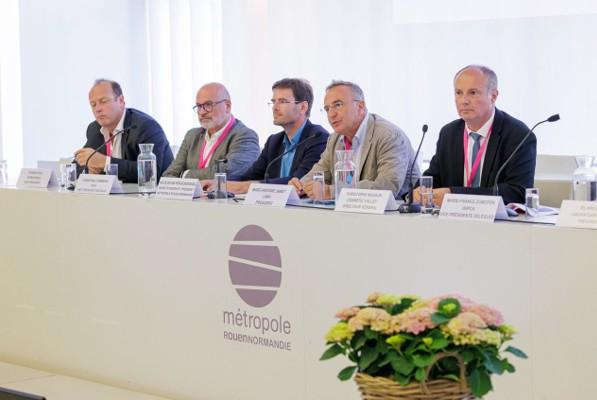 Meeting on June 28, 2022 in a general, extraordinary, and then ordinary meeting, the members of Cosmetic Valley jointly and severally adopted all the resolutions proposed to them, whether it was the modification of the statutes of the division and the conditions for the appointment of its president, or the return to the fundamentals of its business model (more than 2/3 of revenue from the private sector, financial year necessarily in excess, turnover of nearly €5 million).

Marc-Antoine Jamet recalled that the 2021 financial year had seen the presence of Cosmetic Valley on all fronts. A majority of events have thus returned to face-to-face, first and foremost, last October, the international exhibition of cosmetic innovation, Cosmetic 360 in Paris, a number of actions have been undertaken to meet the challenges facing the sector according to 3 axes:

The need to play collectively

This requirement has always been that of the cluster, a society of equals between SMEs and large groups, suppliers and contractors, vector of open innovation and collaborative innovation. It has become imperative to succeed in the ecological transition of the sector and to face economic turbulence. This is why, in partnership with the public authorities, Cosmetic Valley wants to extend the momentum launched, thanks to Agnès Pannier-Runacher, then Minister of Industry, by the creation of a sector committee specific to the sector and the general assembly of cosmetics that the pole had organized. It is therefore looking forward to the launch of phase 5 of the pole policy so that its mission as national coordinator of the sector is strengthened, its resources consolidated and new cooperation set up with the public authorities. In this context, the objective of Cosmetic Valley remains, despite the rearguard fights of some local associations, to federate under the banner of a national brand, Cosmetic Valley France, the international efforts of its members and the promotion, with Business France, of the manufactured in France.

The opening of a branch in Brussels and the launch of an S3 platform bringing together around Cosmetic Valley other European clusters that have chosen to bet on cosmetics, illustrate the pole's desire to be the spearhead of innovation and the cosmetics industry in Europe even though the legal deadlines (evolution of Reach and cosmetics regulation) will be numerous in 2022.

The need to deepen regional cooperation

Like the partnerships set up this year with French Guiana, where Cosmetic Valley has inaugurated a branch that will be an asset in its biodiversity strategy, soon to be in Martinique, and with the Île-de-France, the continent's leading economic region, other territories should follow in 2022 and negotiations have already been initiated in this direction in recent months with the Hauts-de-France. By pursuing this territorial network, a true German-style industrial fabric, by taking its members internationally, by animating the sector, Cosmetic Valley is giving itself the means, with new resources, new partners, new outlets, to keep the France its place as world leader in an increasingly competitive universe.

Marc-Antoine Jamet said: " This is a difficult time, but it can and must also bring opportunities. We must be activists, not wait-and-see. The city of Rouen, which hosted the general assembly of our cluster, has been able to reinvent itself and, while meeting the challenges of the times, regain its attractiveness. It is an inspiration for Cosmetic Valley which, with its partners, public and private, and with the wealth and dynamism of its members, is launching new projects, to give the sector the means to succeed in its ecological, digital, geopolitical and technological transformation, in order to maintain its global leadership. My presidency has no other goals ."